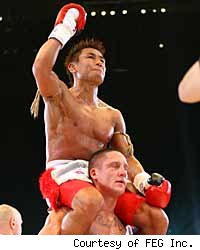 It was a terriffic battle that featured back-and-forth fast-paced action throughout, but Masato ultimately landed more effective punches and earned the decision. Afterward Souwer showed a great deal of sportsmanship, lifting Masato onto his shoulders and allowing him to soak in the adulation of the Japanese crowd.

The bout was billed as Masato's retirement fight, although fighters often say they're going to retire and then change their minds, so it's very likely that the 30-year-old will step into the ring again. He's certainly still good enough to keep fighting -- Masato has plenty of great fights left in him.

But if he does retire, Masato will be remembered as both one of the most popular and one of the best Japanese kickboxers in history. He gave it a great showing on New Year's Eve.

In other K-1 action, the 38-year-old Ray Sefo returned to the kickboxing ring for the first time in more than a year and beat Yosuke Nishijima via unanimous decision. And Masaaki Noiri surprised everyone by winning the Koshien championship for kickboxers under age 18 in an impressive showing for a 16-year-old who is a likely future star of K-1.

The MMA portion of Dynamite 2009 was highlighted by first-round victories for Melvin Manhoef, Shinya Aoki, Gegard Mousasi and Alistair Overeem.