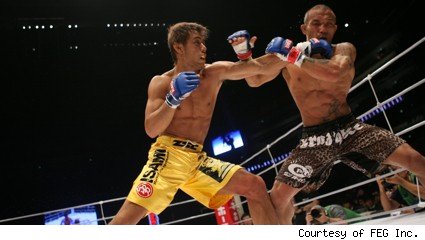 The legendary Japanese mixed martial artist Norifumi "Kid" Yamamoto returned to the ring on New Year's Eve at Dynamite 2009, but he still can't get back in the win column: Yamamoto lost a unanimous decision to Masanori Kanehara.

At times Yamamoto showed flashes of the striking prowess that made him one of the best fighters in the world a few years ago. But he also showed a lot of ring rust, and it's fair to wonder whether the soon-to-be 33-year-old Yamamoto will ever be a Top 10 featherweight again.

Injuries prevented Yamamoto from fighting at all in 2008, and prior to New Year's Eve he fought just twice in 2009 -- once in MMA and once in kickboxing -- and lost both.

Now Yamamoto has lost once again, to a capable fighter in Kanehara (who won this year's Sengoku featherweight tournament) but to a fighter that the Yamamoto of 2005 would have destroyed. It's kind of sad to see, but "Kid" Yamamoto is no longer among the sport's elite fighters.