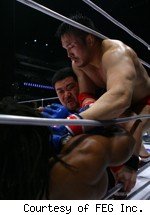 The end came during an exchange where both men missed right hands, but Minowa threw an extra punch while Sokoudjou still had his hands low. Sokoudjou fell to his butt and the referee immediately intervened to award Minowa the TKO win.


More Coverage: Dynamite!! 2009 Results | Melvin Manhoef TKOs Kazuo Misaki
The knockdown was after around three minutes of almost zero action in a dull third round that saw both fighters twice receive yellow cards for inactivity -- each warning deducts a hefty 10% from a fighter's purse.

The gameplan in the first two rounds was simple for the leglock specialist. Minowa focused soley on footlocks, repeatedly pulling guard to pick at Sokoudjou's ankle and knees. However, Sokoudjou would get the better of Minowa by staying on top position and punching down on the self-proclaimed "real pro wrestler."

Minowa, who submitted Errol Zimmerman at Dynamite!! 2008, closed out his second consecutive year with his hands raised.