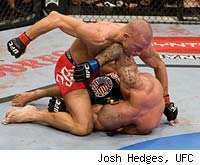 The awards were voted on by MMA fans around the world.

"I would never recive this award and success in my career if I hadn't been surrounded by incredible people," St. Pierre said in his acceptance speech. "Thanks to my training partners and my manager. This trophy is going to my mom's house. My parents are the people that supported me from the beginning. Without them I wouldn't be able to do this job for a living."

Though it was the second edition of the award show, sponsored by Fighters Only Magazine, the ceremony will mark the first time MMA will have a televised award show. Though the entire 1-hour, 40-minute ceremony aired live on Versus.com, a one-hour taped version will air on Versus on Jan. 6 at 9 pm.

Awards were given out in 18 categories ranging from Fighter of the Year to Best Overall MMA Clothing Manufacturer.

Among the other big winners was noted trainer Greg Jackson, who won the Coach of the Year award and saw his Greg Jackson's Submission Fighting Camp win the Best MMA Gym category.

Jackson brough a bit of humanity to the sometimes ostracized sport, thanking his family for their understanding.

"I'd like to take this time to thank my wife Stephanie and my kids," he said. "They're very understanding for a dad that's on the road all the time. I'm the worst coach on this team. Some of you guys know them. I want to thank the coaches who make me look so good. You know who you are."

A Special Achievement Award was bestowed upon the recently deceased co-founder of TapouT, Charles "Mask" Lewis, who tragically died in a car accident earlier this year.

"I know Charles is watching tonight," said his fellow TapouT co-founder Dan "Punkass" Caldwell. "I felt him in the room. We were here last year for New Year's. It was a great time. Those are the memories I like to remember. Charles was an ambassador to the sport. He was a leader and I looked up to him a lot as did a lot of people. He'll always be remembered. Thank you to Lorenzo and Dana for keeping his memory alive in the cage."

The Ultimate Fighter 9 Finale bout between Diego Sanchez and Clay Guida won Fight of the Year, while Cris Cyborg won Female Fighter of the Year. In perhaps the only surprise of the night, Gegard Mousasi won the European Fighter of the Year Award ahead of his good friend and sometimes training partner, Fedor Emelianenko.