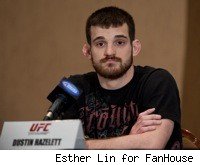 LAS VEGAS -- 2009 has not been kind to Dustin Hazelett. The UFC welterweight was forced to pull out of a bout earlier this year due to a torn ACL and was left without an opponent last month when Karo Parisyan backed out of their UFC 106 bout three days before fight night.

But Hazelett finally has a fight on his hands, and it's against the hard-hitting Paul Daley at UFC 108 this Saturday night. MMAFighting.com spoke to "McLovin" about his tumultuous year, exposing Daley's ground game, and "Semtex's" supreme confidence going into their fight. Check out the video interview below.