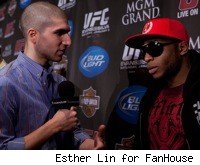 LAS VEGAS -- No one will ever accuse Paul Daley of not having confidence in himself, and as "Semtex" heads into his second UFC fight this Saturday night against Dustin Hazelett, the Englishman is as confident as ever that he will be able to impose his will against "McLovin."

MMAFighting.com spoke to Daley at Wednesday's UFC 108 pre-fight press conference about why thinks Carlos Condit, his original opponent for this card, found a way out of their fight, his ground game and whether he would ever fight his friend and training partner, Dan Hardy. Check out the video interview below.