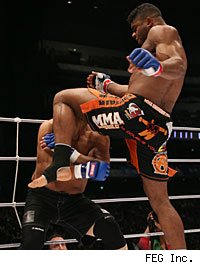 Overeem predicted a knockout in less than three minutes against Kazuyuki Fujita and it took him less than half that time. Overeem nailed Fujita with a left knee so powerful that it crumbled the man famous for his "Ironhead" between the ropes and required Fujita to be stretched out.

Mousasi fought the heavier Gary Goodridge and outclassed the 43-year-old veteran. Mousasi effortlessly took Goodridge down with the double-leg and pounded him out for the referee stoppage. Goodridge covered up but wasn't finding a way to escape; and although he rightfully complained of early stoppage, few will be questioning Mousasi's victory.

The two fights served no purpose other than to feature Overeem and Mousasi on Japanese MMA's biggest night of the year. To show what kind of mismatches the fights were: Entering the fights, Fujita and Goodridge combined for eight losses in their last 10 fights, while Overerem and Mousasi have been undefeated in their last 20 fights.