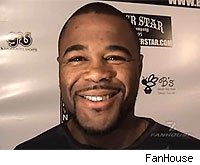 Former UFC light-heavyweight champion Rashad Evans clearly had his issues with Quinton "Rampage" Jackson during their season together taping "The Ultimate Fighter." But surprisingly, Evans says that the time they spent bickering was actually beneficial to him -- at least about one thing.

That's right, Evans said during a Wednesday press conference at the MGM Grand that Rampage's propensity to pop off about Evans' highlight reel knockout loss to Lyoto Machida at UFC 98 helped him get past the defeat.

"That was probably the most healing part to let me get over it," Evans said while talking to the media about his upcoming UFC 108 bout with Thiago Silva. "When you have someone constantly saying, 'You got knocked out,' and talking about 'the stanky leg,' and all that stuff, you've got to laugh about the the situation. You get to laugh at yourself. He was very serious, but if someone makes light of it, and looks at it in a way different than you do, it helps you get over it."

Perhaps not surprisingly, Evans spent quite a bit of time answering media questions about Jackson rather than Silva.

Earlier during the afternoon, UFC President Dana White told reporters that Evans (13-1-1) likely wouldn't get a crack at Jackson unless he defeated Silva on Saturday. Jackson -- who took a leave of absence to film a role in "The A-Team" movie, much to the UFC's chagrin -- recently said he'd come back to the company to fight Evans.

Even if White is serious about his stance on the fight -- and it seems crazy to think he'd really throw away a bout the company spent months building on TUF -- Evans said he has no reservations about risking it to face Silva.

"When I took the fight with Thiago, [Rampage] wasn't on the horizion," Evans said. "I took it with the intentions of fighting Thiago. As far as Dana saying I need to win this fight, it doesn't change anything. I'm going to fight the way I would've before if he had not said those words. Having Rampage at the end for a little dessert, it's irrelevant to me. It doesn't even matter."

Ironically, Silva spent most of the time on the stage as the most ignored man there, getting only one question until the final two of the press conference were addressed to him.

Asked whether he felt disrespected at the lack of attention, Silva broke into English for the first time, saying, "It's a great opportunity for me. I feel very happy. I don't care. I'm here to fight, man. That's it."