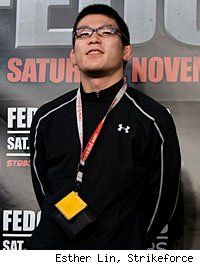 How: Watch live on HDNet or follow our live coverage here at MMAFighting.com

* DREAM, Heavyweight bout Gary Goodridge vs. Gegard Mousasi
Mousasi is one of the best fighters in the world and should be taking on better opponents than the washed-up Goodridge. Pick: Mousasi

* DREAM vs SRC, Heavyweight bout: Alistair Overeem vs. Kazuyuki Fujita
Overeem is one of the best fighters in the world and should be taking on better opponents than the washed-up Fujita. Pick: Overeem

* DREAM vs SRC, Heavyweight bout: Katsuyori Shibata vs. Hiroshi Izumi
Although Shibata actually has a win over Minowa on his record, he's around mostly for entertainment purposes, not because he can fight. Pick: Izumi

* DREAM vs SRC, Middleweight bout: Melvin Manhoef vs. Kazuo Misaki
This should be one of the more fun fights on the card, although I'm personally more excited about seeing Manhoef in Strikeforce in 2010. Pick: Manhoef

* DREAM vs SRC, Welterweight bout: Hayato Sakurai vs. Akihiro Gono
I expected Sakurai to win Dream's welterweight tournament. I was wrong about that, but I think he'll beat Gono, who's fairly well known to American fans as a former UFC fighter. Pick: Sakurai

* DREAM vs SRC, Lightweight bout: Shinya Aoki (DREAM Champion) vs. Mizuto Hirota (SRC Champion)
Aoki is one of the best lightweights in the world and unquestionably the most dynamic submission specialist in all of MMA. He should handle Hirota. Pick: Aoki

* DREAM vs SRC, Lightweight bout: Tatsuya Kawajiri vs. Kazunori Yokota
I wanted to see Kawajiri take on Aoki at Dynamite. Maybe we'll get to see that in 2010 after they both win on New Year's Eve. Pick: Kawajiri

* DREAM vs SRC, Featherweight bout: Hiroyuki Takaya vs. Michihiro Omigawa
Omigawa got a lot of attention for his performance in the Sengoku featherweight tournament. Pick: Omigawa

* DREAM vs SRC, Featherweight bout: Norifumi Yamamoto vs. Masanori Kanehara (SRC Champion)
If you've been an MMA fan for less than two years, you have no idea why so many people are so excited to see the return of Kid Yamamoto. But he was once among the best and most exciting fighters in the sport, and I'm thrilled that he'll be back in the ring. Pick: Yamamoto

K-1 Fights
* K-1 MAX, bout: Masato vs. Andy Souwer
For Japanese fans, this is the biggest fight of the night, between two of the best kickboxers ever. Masato is a legend who will likely lose what is billed as his final K-1 match. Pick: Souwer

* K-1 Heavyweight bout: Ray Sefo vs. Yosuke Nishijima
Sefo is a legend who wants to show he still has some gas in the tank. I think he has enough to beat Nishijima. Pick: Sefo