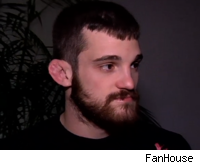 It was only over a month ago when Dustin Hazelett got the news that his UFC 106 opponent Karo Parisyan had pulled out of their scheduled match just two days from the bout.

After going through a torn ACL, physical rehabilitation, and burning through much of his financial savings while on the mend for a year, the 23-year-old Hazelett should have been devastated. Yet for some reason, he wasn't.

"I was surprised with how little I was upset by it, and so was everyone who knows me," the UFC welterweight told FanHouse. "I trust in God's plan. I had faith. You never know why something's happening, but I felt it was all for the best, and now I believe it, because I have this fight."

"This fight" is his upcoming UFC 108 matchup with Paul Daley, a hard-hitting Brit nicknamed "Semtex" (a plastic explosive) for his power strikes, and who has knocked out each of his last three opponents in the first round.

The UFC made the bout when Daley's original opponent, Carlos Condit, was forced out with an injury. By that time, the organization had made good on a promise to pay Hazelett his win and show money from the UFC 106 matchup that never materialized through no fault of his. With a win over Daley, he has a chance to double up his paydays in just over a month.

"It's great to work for an organization like that," said Hazelett (12-4). "I was still sad, though about not being able to fight [at 106]. The money is not why I do it. The fight is the payoff, but I was running very low on money from the year layoff. As a fighter, if you don't fight, you don't get paid. This is all I do; I don't have a secondary income. So the money is definitely a blessing."

The opportunity to fight Daley also gives him a bigger platform than his previously scheduled tilt.

While Parisyan was considered a top 10 welterweight for years, his recent issues and relative non-activity (his last fight was in Jan. 2009 and resulted in a no-contest after testing positive for banned painkillers) have dropped him from the ranks of top contenders.

Meanwhile, Daley (22-8-2) has cracked into the welterweight Top 10 lists of several media outlets with his recent wins, especially impressing with his most recent victory, a 2:31 demolition of welterweight contender Martin Kampmann at UFC 103 in Sept.

In addition, Daley vs. Hazelett is being billed as the co-main event of UFC 108.

Daley, who has won 10 of his last 12, has historically had trouble with grapplers, which should make for some drama in his bout with Hazelett, who incorporates jiu-jitsu into his MMA game as smoothly as anyone in the sport.

Still, there are those who wonder if Hazelett should have gone with a less dangerous opponent his first time back from injury.

"I've never fought a striker the caliber of Daley and I like to challenge myself," he said. "I don't like easy fights or gimmes. No cans for easy wins. When I was coming back I was adamant about no tuneup fights, and the UFC was helpful in not giving me one."

Hazelett qualifies his advantage on the ground as "very substantial" but adds that he has confidence in his own striking.

"I've been working on my standup a lot, not just in the time that I've been off, but before that," he said. "I think I've made a lot of improvements in my striking. I think people underestimate my ability there. That's one thing I'm looking forward to in this fight. Because he's one of the best strikers in the welterweight dvision, I'd like to see how I match up with him."

When offered the matchup, Hazelett did have to take time to think about the fight. Given his original November fight date, he had hoped to spend a significant amount of time with his family during the holidays.

Having to fight on Jan. 2 would cause him to sacrifice most of that time, but his family was supportive of the new date, and their blessing made his decision easier.

"I like spending time with them and I don't get to see them as much as I would like to," he said. "You know, you grow up with your family being close, then you move away and don't see them much. It's hard."

So he wouldn't be forced to break camp early, some of his family members traveled to his Ohio home to spend the Christmas holiday with him.

Another underappreciated factor in his decision was physical. After training hard for the Parisyan camp, he showed up to Las Vegas in mid-November in peak condition. Taking a fight in early Jan., would force him to restart his camp, work another month and stay at optimum performance levels.

Having dealt with all those factors, Hazelett feels physically and mentally ready to return after the long layoff and prove to the MMA world that the forward momentum he showed in his early UFC outings won't skip a beat after more than a year away.

"It's a good feeling knowing I'm so close to returning," he said. "I've definitley missed fighting. It's really hard to go from not just the fighting but training multiple times a day to not being able to do anything. That was hard to deal with and I'm glad it's over."