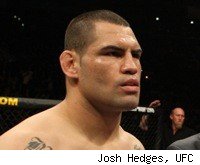 On the year-end edition of The MMA Hour, we were first joined by heavyweight contender Cain Velasquez, who is set to face Antonio Rodrigo Nogueira at UFC 110 in Sydney, Australia. Velasquez recently returned from a press tour Down Under, and talked about meeting the Australian media and fans for the first time. He also talked about the current state of the heavyweight division and whether he believes his fight should have been for the interim title, not Frank Mir vs. Shane Carwin.

Later in the show, we talked to lightweight Dan Lauzon, who will make his return to the Octagon against Cole Miller at UFC 108 on Saturday night. Lauzon talked about making his UFC debut when he was 18 years old in 2006, and how he is now a more mature fighter. We closed out the show with Sean Sherk, who was supposed to fight Jim Miller at UFC 108, but pulled out last week after sustaining a cut over his eye in training. The former 155-pound champion discussed where his career goes from here and who he would like to fight next. Watch or listen to the show below.