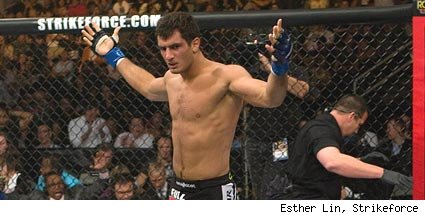 The performances of four Strikeforce-contracted fighters and the potential ramifications they will have for Strikeforce's plans in 2010 is something to keep an eye on Thursday at Dynamite!! 2009 in Saitama, Japan.

When it comes to the prestige of Strikeforce's roster, the San Jose-based promotion has little to benefit from and a lot to lose with Alistair Overeem, Gegard Mousasi, Rameau Thierry Sokoudjou and Melvin Manhoef fighting on the New Year's Eve card. Manhoef is arguably the only person with something to gain if he beats former top 10 ranked middleweight Kazuo Misaki.

Luckily, Strikeforce's highest stakes are also the safest bets. Strikeforce titleholders Overeem and Mousasi could potentially create major problems for Strikeforce if either one or both were to fall short, but it's highly unlikely that either one will lose.

However, we've seen stranger things happen in MMA and the timing of the fight date does present question marks for Overeem and Mousasi.

Overeem is returning to the ring just three weeks after splitting two kickboxing bouts in one night at the prestigious K-1 World Grand Prix. Could wear and tear be an issue? He assured reporters Tuesday that he has no injuries and his conditioning is fine, but it doesn't help the fact that the Fujita fight will be Overeem's eighth in a one-year period.

With Mousasi, the light heavyweight champ revealed to the media that his training was "not good" because he wasn't sure if he would be fighting under MMA or kickboxing rules. He had been preparing for kickboxing, then boxing and finally received confirmation three or four days ago of the Goodridge fight. Further, he didn't learn that the bout would be under MMA rules until the day he left for Japan.

He also admitted to the media that it was "difficult" to remain motivated for Dynamite!! because of the uncertainty of a fight.

To be fair, Goodridge took the fight on about two days notice and claims he has never seen Mousasi fight nor does he plan on studying Mousasi.

"I find that if you follow fights too much sometimes what happens is that you forget what you do," Goodridge said. "I have a good strong game for myself. He also has his own game. I'm going to follow my game."

Fujita and Goodridge combine for eight losses in their last 10 fights.

As I mentioned earlier, Manhoef has the most to gain. However, his statements Tuesday to the press do not suggest he is a man looking to take advantage of moving up the ranks.

"He has everything complete," Manhoef said. "I think my stand up is pretty good also. My ground game is a ... everybody knows it (Laughs.) ... This is me. I don't have a gym to train the ground anymore, so this time I don't do ground game."

Check in Wednesday morning for MDS' Dynamite!! 2009 Preview and Predictions.