Steve Cantwell Out of UFC 108 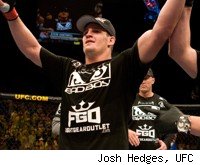 The UFC 108 card that has already been hit hard by injuries has suffered one more: Steve Cantwell is out of his fight with Vladimir Matyushenko.

It's unclear why Cantwell has been removed. A former WEC light heavyweight champion who at age 23 has already been in a number of big fights, Cantwell had been quoted as recently as a few days ago talking about his preparation and how excited he was about the fight.

UFC.com has removed both Cantwell and Matyushenko from its fight card, although MMA Weekly reports that Matyushenko is staying ready and could still fight if a suitable replacement can be found on four days' notice.

Matyushenko vs. Cantwell was not slated to be televised on either the Spike preliminary card or the pay-per-view card, so it's not a huge loss for fans who were planning to watch from home. But it is yet another disappointment for a fight card that seems to be cursed.