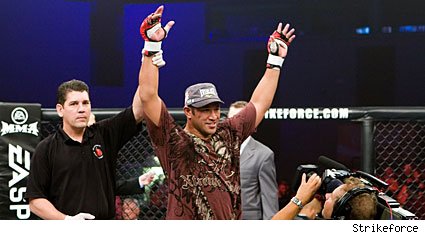 Newcomers to the sport of K-1 are quick to write off Ray Sefo as an over-the-hill fighter who lost six K-1 fights in a row between 2007 and 2008 before getting a win over Hong-Man Choi on the undercard of the K-1 Grand Prix last December. Little do these new fans realize that during that period of hardship in the ring, Sefo also experienced his greatest hardships outside of the ring with death and disease befalling his closest family members, of which I will not disclose any more except that to a family man like Sefo, these tragedies affected him greatly.

Fans are also quick to forget just how much of mainstay Sefo has been in K-1, having made his debut against Ernesto Hoost all the way back in 1996, when Sefo entered the world's premier fight organization as a six-time kickboxing and Muay Thai champion at light heavyweight, cruiserweight, heavyweight and super heavyweight.

For years Sefo's tremendous hand-power and his ability to withstand the hardest of punches made him one of K-1's most feared fighters. Who will ever forget his epic knockout of Jerome LeBanner in 1997 in just 91 seconds with a switch-hit right hand (a Sefo specialty that he now imparts to training partners – see Jay Heiron knocking out Jason High at Affliction with this very technique) that broke LeBanner's LeBanner's jaw in three places. There was also his two quick first-round stoppages of Musashi and Cyril Abidi in a run to the 2000 K-1 World Grand Prix final; the epic slugfest in which he beat Mark Hunt in Fukuoka in 2001 still regarded by fans as the greatest fight in K-1 history; and his use by K-1 as a gatekeeper for up and coming talent, which saw Sefo dispatch of Gilbert Yvel in two rounds, Melvin Maenhoff in just 41 seconds, and Ruslan Karaev in 37 seconds in their first meeting and 1:42 in their second encounter.

Over the last 18 months, Sefo turned his attention to MMA. Training out of Xtreme Couture in Las Vegas, where he counts Tyson Griffin, Jay Heiron, Martin Kampmann and Vitor Belfort among his daily training partners, Sefo is quick to point to the gym's owner Randy Couture as his inspiration to continue fighting at an elite level, even as he approaches 40.

"I look at Randy and see him doing amazing things that just blow me away at his age," says Sefo. "He is an inspiration to me and makes me push myself harder than I ever have before. Randy's achievements are a tribute to all of us older fighters, as are the achievements of people like Peter Aerts who is 39 and still powering strong and another source of inspiration to me."

The appeal of Sefo is not lost on the American MMA market with Scott Coker signing the K-1 veteran to a Strikeforce contract, of which Sefo made his debut in September with a second-round TKO (due to injury) over Kevin Jordan. Before that Sefo had just one previous MMA fight when he knocked out Min Soo Kim with a head kick in a Hero's match in 2005.

It is K-1 fighting however which is closest to Sefo's heart and it is to his preferred rule set that he returns on New Year's Eve with a matchup against battle-hardened former WBF cruiserweight world boxing champion, Yusuke Nishijima.

On paper this match promises to be an all-out slugfest as Nishijima looks to test the powerful hands that scored him 15 KOs in a 24-win pro boxing career against Sefo's famously solid jawline and the New Zealander's own tremendous hand power that has scored most of his 54 career knockouts in 75 wins. The difference between the two could be speed, with Sefo, even at 38, remaining one of the fastest heavyweight kick fighters in the world.

With word of Sefo negotiating a new K-1 contract for 2010, and his very public calling out of Alistair Overeem during K-1's live Grand Prix broadcast on HDNet, Sefo not only needs to beat Nishijima come New Years Eve but needs to beat him effectively. If he can channel the spirit of his only other Dynamite appearance in 2004 when he knocked out Gary Goodridge in just 24 seconds, Sefo will stride into the New Year confidently pointing towards a showdown with Overeem and also his much-asked for trilogy match with current champion Semmy Schilt.

Michael Schiavello is a guest columnist and is an announcer for HDNet's MMA coverage. For more information, visit www.hdnetfights.com.