Hulk Hogan 'Learned a Ton' From MMA, Thinks Pro Wrestling Should Do Same 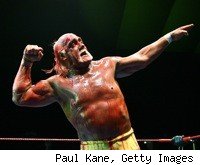 As Hulk Hogan prepares to make his return to the world of professional wrestling on Jan. 4, he fully recognizes that the sports entertainment landscape has changed drastically since he was actively wrestling.

Hogan recently signed a contract with upstart Total Nonstop Action wrestling, and will make his debut for the organization on a live Monday night edition of TNA iMPACT! on Spike TV next week. So not only will Hogan and TNA be competing for eye balls with his former employer, World Wrestling Entertainment, the wrestling legend realizes that he must now compete with the world of mixed martial arts, as well.

However, instead of knocking MMA, and more specifically, the Ultimate Fighting Championship, Hogan says he is learning from the sport, which has recently surpassed WWE in terms of yearly pay-per-view buy rates.

"MMA is spanking the WWE as far as the pay-per-view stuff," Hogan told FanHouse on Tuesday. "Dana White and the UFC has done an amazing job, and it's all about timing. The UFC was ready to close its doors, they were losing a ton of money, they were going under, they were getting ready to go out of business, and then they did a reality show called, The Ultimate Fighter. They developed the characters; they made people care about the fighters; the people found out who the fighters were; they breathed life into the fighters. That's what I want to do with TNA. They've got the best talent in the world down there, but no one is breathing life into the characters."

Not only will Hogan be appearing on TNA television in a role he describes as, "the Vince McMahon of TNA," he also said that he will be running the show creatively behind-the-scenes. It is there that the 56-year-old will look to emulate what the UFC has been able to accomplish over the past decade.

"I have learned a ton of stuff from MMA, watching them," he said. "They remind me of TNA. Ton of talent, but no one has put that Frankenstein, shock the monster, breathe some life into the characters. I learned a ton from MMA, and I get along great with Dana White -- he's awesome."

FanHouse's full interview with Hogan discussing his return to wrestling and more will run on Monday, Jan. 4.