Fight of the Year: Ben Henderson vs. Donald Cerrone 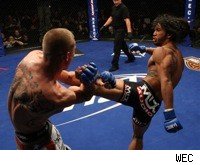 Just three weeks before Ben Henderson was set to match up with his old friend Donald Cerrone for the WEC interim lightweight title, I met him in a Dallas hotel for an interview.

Henderson, sitting quietly by himself at a hotel eatery, was quick to point out the meaning of the match to him; he'd always intended on being not only a champion, but also the best fighter in the world.

Nobody is saying the 26-year-old is in that conversation yet, but legends have to start somewhere. And if one day Henderson is thought of as the best in the world, his tale of greatness may well start at WEC 43 against Cerrone, in what was MMA's fight of the year.
For 25 minutes, Henderson and Cerrone traded momentum shifts, with Henderson scoring with takedowns and groundwork before Cerrone would turn the tide with slick submission attempts.

On more than one occasion, it looked like Henderson was all but finished, only to find a way to free himself from a horrible position.

In the first it was a guillotine, then a triangle. In the second, it was a kimura/arm bar. In the third it was a triangle. In the fourth it was a d'arce. In the fifth it was another arm bar. The attempts were relentless from Cerrone, who continually found himself on his back but was often the one on the attack. Meanwhile, the drama was kept at a fever pitch as Henderson continually walked a tightrope into and out of trouble.

At some point, Cerrone had to be wondering what exactly he would have to do to get Henderson to submit. Henderson, meanwhile, kept up his own pressure attack. Every time he was free, he was working to take Cerrone out of his favored striking game with perfectly timed takedowns and effective ground and pound. And when the fight did stay standing, Henderson surprised most experts by staying with Cerrone for most of the encounter.

After five full rounds of bell-to-bell action, the fans were left with a classic and the judges were left with a decision that was sure to rankle at least a few observers. Henderson got the nod by a sliver, but if one or two early 2010 matchups go the right way, Cerrone could have a chance at revenge.

2. Josh Thomson vs. Gilbert Melendez, Strikeforce: Evolution
Strikeforce made huge strides in '09, and it saved its best for last with a thrilling rematch between two friends fighting for the lightweight belt that each laid a claim to.

Melendez had lost the first time around, but he returned with a new plan. At times, this one was a technical marvel with Melendez taking out Thomson's lead leg with kicks, and other times it devolved into a battle of attrition with both men throwing haymakers. Either direction it moved in, however, it was compelling and exciting.

When the final horn sounded and the 25 minutes of action came to a close, both men raised their hands in the air. Though Melendez got the decision, they were right; they were both winners.

3. Takeya Mizugaki vs. Miguel Torres, WEC 40
Card after card, the WEC seems to deliver at least one classic. This one came in the main event. With Mizugaki taking the fight on short notice, few gave him a chance to win. Instead, he shocked Torres by oustriking him in the first round and forcing the then-champion to take his game to new heights in defending his belt. Showing his championship pedigree, Torres made key in-fight adjustments and began to take over as the fight progressed, but not without occasional moments of excellence from the challenger.

Though Mizugaki ultimately came up on the short side of the judges' decision, he became the first man to take Torres the distance in nearly four years.

4. Clay Guida vs. Diego Sanchez, TUF 9 Finale
Since joining the UFC in 2006, Clay Guida is just 5-5, yet he never seems to get one of the biggest reactions on fight night. The reason why is simple enough to see when you watch him compete. Case in point came in June. Sanchez and Guida engaged in one of the wildest exchanges of the year in the first round of their fight, with Sanchez eventually dropping Guida with strikes and then a vicious head kick. Though Guida seemed on the verge of being finished, he used his wrestling and unending motor to work his way back in the fight. Sanchez eventually got the decision but it came much harder fought than he probably expected after the stunning opening flurry.

5. Hideo Tokoro vs. Abel Cullum, Dream 9
This fight -- little seen by most outside of diehard fans -- had everything: standup battling, technical grappling, momentum shifts and an unrelenting pace. It was a spectacular exhibition of mixed martial arts, with Tokoro finally winning via rear-naked choke after almost 12 frenetic minutes of action.