What Could've Been for This Saturday's UFC 108 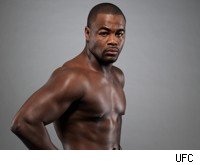 As an annual tradition, the UFC likes to throw a spectacular fight card to close out the year. UFC 66 had the Chuck Liddell-Tito Ortiz rematch that broke records in 2006. The following year, UFC 79 featured Georges St-Pierre-Matt Hughes for the title and Chuck Liddell-Wanderlei Silva in a dream matchup. And of course, last year UFC stacked UFC 92 with a trio of main events: Forrest Griffin-Rashad Evans, "Rampage" Jackson-Wanderlei Silva and Antonio Rodrigo Nogueira-Frank Mir.

So what happened this year?

UFC 108 early on was looking to be a tremendous card, but a bizarre number of Injuries and health issues have scratched several planned main events and at least four other matchups.

At first, it appeared the UFC had a bankable main event on its hands with Anderson Silva vs. Vitor Belfort, but rehabilitation following a right elbow surgery has postponed the title match. Then three of the UFC's heavyweights went down. Gabriel Gonzaga and Antonio Rodrigo Nogueira were out with staph infections and Brock Lesnar was found to have a serious medical condition, ending a title defense date with Shane Carwin. Tyson Griffin, Rory Markham (knee), Sean Sherk (cut) were others attached to the card that were forced out due to injuries.

Of Saturday's 11 fights, only six of the fights (*) will go on as initally planned. Here's what the card could have looked like compared to what the actual lineup will be on Saturday.