Upset of the Year: Ray Mercer Knocks Out Tim Sylvia 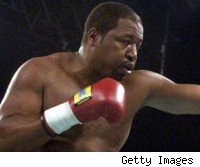 There are a variety of methods in which a fighter can win and all it takes is a single mental lapse for a fight to end. These are strong ingredients for unpredictability in even the most straight forward matchups. Who can forget Matt Serra knocking out Georges St-Pierre to win the UFC title in 2007 or when Junior Dos Santos defeated Fabricio Werdum last year?

2009 had its own fair share of wild upsets and below is my list for the top five.

5. Paulo Thiago vs. Josh Koscheck, UFC 95
Paulo Thiago appeared to be someone brought in to keep Josh Koscheck active and the assumption was that Thiago would be another one-and-done in the UFC. Sure, he was perfect in 10 fights coming into his UFC debut, but his fights were against unheard-of local fighters in Brazil. However, with a nasty right uppercut that dropped Koscheck, Thiago propelled himself from an unknown to a title contender -- for better or for worse: Thiago has yet to receive an easy assignment.

4. Norifumi "KID" Yamamoto vs. Joe Warren, DREAM.9
Warren can claim to have the best start of any MMA fighter's career. In his MMA debut, he bested former WEC champion Chase Beebe, but even more shocking was when he topped Norifumi "KID" Yamamoto in his second career MMA fight. I would have ranked this higher as a upset, but Yamamoto was coming off a knee surgery and ring rust could have conceivably reduced Yamamoto's chances against Warren.

3. Mackens Semerzier vs. Wagnney Fabiano, WEC 43
Coming into the fight as an unknown with only four fights on his belt, Mackens Semerzier launched himself in the top 10 rankings with a surprising win over final IFL featherweight champion Wagnney Fabiano. Fabiano was on an eight-fight winning streak and had never been finished in his nine-year career. Semerzier not only defeated the accomplished grappler, but also submitted him with a triangle choke in two minutes and 14 seconds.

2. Andrei Arlovski vs. Brett Rogers, Strikeforce: Lawler vs. Shields
2009 was not a good year for Andrei Arlovski. He was knocked out in devastating fashion by Fedor Emelianenko and five months after, suffered a knockout loss to Rogers in 22 seconds. The loss sunk Arlovski's stock and boosted Rogers to the point where he was billable as a threat to Fedor on Strikeforce's first live event on CBS.

1. Ray Mercer vs. Tim Sylvia, Adrenaline 2
What a shocker it was that a 48-year-old making his professional MMA debut would knock out a former UFC champion who a year prior was in the top 10 world rankings and challenging the No. 1 heavyweight in the world. Tim Sylvia was coming off fights against Fedor at Affliction 1 and Antonio Rodrigo Nogueira for the interim UFC title. Meanwhile, Mercer last lost (in an "exhibition" bout) to brawler Kimbo Slice -- by submission. Sure, Mercer is an Olympic gold medalist and a former boxing champion, but nearly all aspects of the fight should have favored in a fight under MMA rules the experienced Sylvia, who practically ruled the UFC's heavyweight division from 2003-2007. To make matters worse, Sylvia lost in nine seconds.