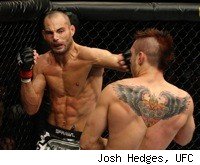 Mike Swick has agreed to step in for his injured American Kickboxing Academy teammate Josh Koscheck on short notice and face Paulo Thiago (12-1) at UFC 109 on Feb. 6.

MMAFighting.com learned of the new bout after reporting Koscheck's decision to pull out of his scheduled fight against Thiago due to an undisclosed injury earlier Monday.

Swick (14-3) last competed at UFC 105, losing to Dan Hardy via unanimous decision. The loss marked his first since dropping down to welterweight in 2008.

Thiago defeated Koscheck in a stunning upset at UFC 95 last February via first round TKO in the Brazilian's Octagon debut. Since then, Thiago has gone 1-1 in the UFC, losing to Koscheck's teammate, Jon Fitch, at UFC 100 and beating Jacob Volkmann UFC 106 in November.

Below is a look at the updated UFC 109: Relentless card:

* Not officially announced by the UFC