Fighter of the Year: Jose Aldo 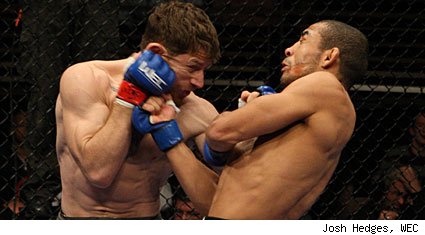 But there's no one in the sport who had a more impressive year than Aldo, the World Extreme Cagefighting featherweight champion, and Aldo is our choice for Fighter of the Year.

Jan. 25: Knocked out Rolando Perez with a knee and punches at the 4:15 mark of the first round of their fight at WEC 38.

June 7: Flew across the ring at the outset of his fight with Cub Swanson, landing a flying knee that flattened Swanson and finished the fight in a ridiculous eight seconds.

Aldo is only 23 years old, and it's scary how good he could become. He was aleady the best fighter of 2009.

Runners up:
2. Fedor Emelianenko: The sport's heavyweight champion knocked out Andrei Arlovski and TKO'd Brett Rogers and showed once again that he's the best in the world.

3. Georges St. Pierre: Thoroughly dominated the two fighters who were supposed to be his stiffest tests, B.J. Penn and Thiago Alves.

4. Cris Cyborg: She destroyed Gina Carano in a fight that took women's MMA to a new level.

5. Lyoto Machida: The UFC's light heavyweight champion showed that he's a striker with knockout power, and not just an elusive tactician. His rematch with Shogun Rua (who is also worthy of Fighter of the Year consideration) is one of the most anticipated fights in 2010.