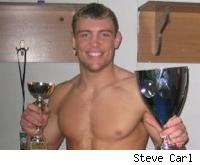 Bellator Fighting Championships continues to add up-and-coming talent to its second tournament season, which is scheduled to kick off in April 2010.

The organization announced on Monday that it had signed welterweight Steve Carl (10-1) for its upcoming eight-man 170-pound tournament.

Carl, whose lone defeat came against UFC welterweight Brian Foster in 2006, is a U.S. Army sergeant who fought in the Iraq War. According to Bellator's press release, Carl took up MMA approximately five years ago while stationed at Fort Hood, TX.

"I was getting offers from the UFC and others, but Bellator was just a better opportunity for me," Carl stated. "I'm really excited about the exposure that Bellator's TV deal will bring me and the chance to fight against some awesome competition."

Carl's journey to MMA stardom is unlikely one, and not because he once served in the Iraq War. In December 2006, Carl shattered his right leg in a severe car accident on an icy eastern Iowa road. Following the accident, he was told by doctors that his fighting career was likely over, but 18 months later, there he was fighting again. He even competed in his first few fights after the injury with a titanium rod implanted in his leg.

"After the accident, everyone wanted me to move on from MMA," Carl stated. "But I knew it in my heart beforehand that I had a chance to make it to the top and I didn't want to give that up. Now I've got the chance to show what I can do in front of the whole country on national TV."

The organization, which aired its first season on ESPN Deportes, recently signed a broadcast deal to air its upcoming second and third seasons live on FOX Sports Net affiliates. Highlight programs will also air on NBC Universal and Telemundo.