Manhoef vs. Misaki Official for 'Dynamite!! 2009'; Mousasi vs. Goodridge 'Close' 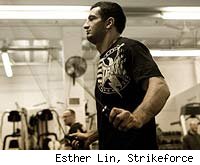 The "Dynamite!! Power of Courage 2009" New Year's Eve card continues to fill up with more big names from the world of mixed martial arts and kickboxing.

The event, which will feature fighters from DREAM, World Victory Road and K-1, recently added an MMA-rules match-up between hard-hitting Melvin Manhoef (23-6-1) and Kazuo Misaki (22-9-2).

Meanwhile, MMA fighter Jason High tweeted on Thursday night that Gegard Mousasi vs. Gary Goodridge will also take place on the card. Michael Kogan, Fighting and Entertainment Group's American director, told MMAFighting.com on Friday that the bout is "close" to being finalized. The fight would take place under K-1 rules.

Manhoef recently signed a multi-fight contract with Strikeforce to fight exclusively in the United States. The contract allows him to compete overseas for DREAM or any other promotion. He most recently lost to Paulo Filho via first-round submission at DREAM. 10 in July.

Misaki, nicknamed "The Grabaka Hitman," has competed for Pancrase, PRIDE, Strikeforce and Sengoku in the past. He most recently defeated Kazuhiro Nakamura via first-round submission at Sengoku 9 in August.

There are currently 17 K-1/MMA bouts officially scheduled for the event, which will air live on HDNet in the United States. The Misaki vs. Manhoef MMA match is the ninth under the DREAM vs. Sengoku Raiden Championship theme banner.

Below is a look at the updated card: