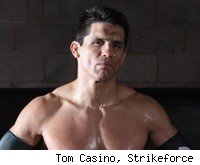 Despite losing three of his last four fights and finding his groove as a television broadcaster, Frank Shamrock isn't ready to hang up his MMA gloves just yet.

The 37-year-old veteran said on a recent edition of The MMA Hour that Strikeforce has asked him to fight on a yet to be announced card "in the first week or so of March."

Shamrock (23-10-2), who most recently lost to Nick Diaz via second-round TKO in April, said that no opponent has been made official just yet.

"Whoever brings ratings. I need ratings. I just need some ratings," Shamrock said when asked who he might face next.

"They don't keep me in the loop, I'm a commentator now. Now, I know nothing. Now they give me a script; I'm a talking head. C'mon, I don't make any decisions."

Shamrock added that while he enjoys doing the television work for Showtime and CBS, "I like the fighting much better.

"The commentary is a lot of work, diligent and studious work. And I would rather sweat and grunt and have a good time."

Strikeforce's next major event on Showtime will take place on Jan. 30 in Sunrise, Fla. They have another CBS show scheduled for the month of April, but Strikeforce CEO Scott Coker has recently hinted that there will be another Showtime event in March. That particular month will be a busy one in the world of MMA:

There are certainly plenty of intriguing options for Shamrock in Strikeforce's middleweight division, but it says here that Scott Smith would make the most sense. Shamrock once famously criticized Smith's physique on an EliteXC broadcast, and since then, Smith has publicly talked about wanting to fight "The Legend." Now following Smith's dramatic come-from-behind victory over another Shamrock rival, Cung Le, last week, this could be the best time to settle that feud.