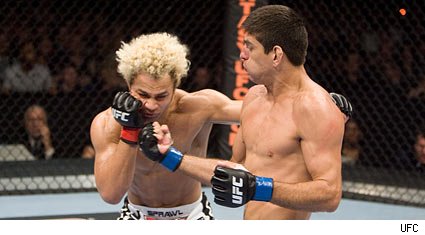 Listen, I know exactly what you're thinking: UFC 95? The free show on Spike TV that everyone said heading into it was one of the weakest lineups in recent UFC history is your choice for the best card of 2009?

Yes, yes it is. And guess what? It wasn't even close.

Now think back to every other major fight card from this past year. All them had a few duds here and there or maybe a big main event that didn't live up to the hype. You know it's true.

Perhaps due to the fact that the expectations going into this card were so low, I found myself enjoying UFC 95 more than any other event this year. And I believe if you think back to how much fun you were having watching those nine fights 10 months ago, you'll agree that UFC 95 exceeded all expectations and gave us the most amount of bang for our back this past year. Even if it was free.

These cards were also considered: