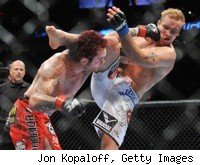 Things weren't supposed to happen this way for Jake Rosholt. The four-time collegiate All-American wrestler and three-time Div. I national champion at Oklahoma State University entered the UFC with a perfect 5-0 record in February. But after losing his second in three fights to Kendall Grove at UFC 106 last month, the UFC released him.

Rosholt was recently a guest on The MMA Hour, and he admitted to not being ready to fight in the UFC so early in his career and wishing he had just a little more time to hone his skills before fighting the organization's top middleweights.

"I absolutely think that it was too early, and it wasn't my decision, really," Rosholt said. "You know, I signed a five-fight contract with the WEC, and it wasn't but two weeks after I signed my contract that I was hearing rumors that they were going to shut [the middleweight division] down and switch it over to the UFC. So I got one fight in the WEC.

"I think if I get those five fights in the WEC, so I would probably still have a fight left on my WEC contract right now and be fighting in that [organization] and then moving on to the UFC, I think I would have been in a much better situation. But it's just how it worked out and I got into the UFC. I think that I am capable of winning all the fights that I lost in the UFC, it just didn't happen -- it didn't go my way. But right now, God's got a plan for my life and it wasn't to be fighting in the UFC right now, but it will all work its way out."

Rosholt's first loss came via first-round submission to Dan Miller in his Octagon debut. He rebounded by submitting Chris Leben in the third round of their UFC 102 fight in August, but prior to that point, he had not looked particularly good against Leben, who had not competed in over 10 months due to a steroid suspension.

The Team Takedown member said he had no idea his job was on the line going into the Grove fight, but had a feeling his UFC run would come to an end after his disappointing performance.

"I give props to Kendall. What he did was really nice, and it was a sweet setup to a triangle," he said.

"I could fight the choke much, much better. You know, I'm pretty difficult in the gym to choke out and I just do a lot better job of fighting. I think out there in front of the lights and in front of the crowd, that I just kind of panicked, and lost my head."

Rosholt says his manager Ted Ernhardt was told by UFC matchmaker Joe Silva that the door has not fully closed on his UFC career, and should he string together a few impressive wins in a row, he could very well find himself fighting again in the Octagon.

And while Ernhardt has talked to "everyone from Bellator to Strikeforce to some small promotions," Rosholt is leaning towards playing the field next year just so that he isn't tied to any single organization if or when the UFC comes calling again.

"I think our direction right now is probably not going to be to go to Strikeforce or anywhere like that. I don't really want to get tied down in a long-term contract. I just want to fight fight-to-fight just in case an opportunity arises that the UFC calls and I may be able to get back in there with them.

"I think we're going to try to go and get some good fights for me in some not high-profile name organizations so I can get some experience and keep getting better. Basically, what I'm trying to do is trying to get back into the UFC."

For now, Rosholt, who expects to fight again come February, is licking his wounds. He says this is the first time he has been cut from anything in his life, and it doesn't feel good. That said, he's remaining positive because he knows that at 27 years old there will be plenty more opportunities to prove that he can translate his successful collegiate career into a dominant run in MMA.

"It's not the end of the road for me -- this is just the beginning of my career. It's just a bump in the road, and I'll be back fighting in the UFC some day. I just got to go out now and get some more experience and get some more wins under my belt. More than anything, it just hurts my pride. I've never been cut from anything in my life. So it was a little bit hard to swallow, and I love fighting in the UFC. I want to get back there someday and I will with more experience and a little bit of time. I'll get back in there and I'll be better off because of this."