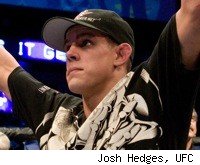 On this week's edition of The MMA Hour, we were first joined by UFC lightweight fighter Joe Lauzon, who will be making his return to action at UFC 108 against Sam Stout after an 11-month layoff. "J-Lau" talked about recovering from knee surgery, fighting on the same card as his brother, Dan Lauzon, and why he would have no problem fighting Dan if the UFC wanted them to.

Later in the show, we spoke to light heavyweight Vladimir Matyushenko, who faces Steve Cantwell at UFC 108. "The Janitor" discussed the keys to defeating Cantwell and why he finally feels like there is some stability in his career. We rounded out the show talking to Jesse Lennox, an up-and-coming welterweight who faces Rick Story at UFC Fight Night 20 on Jan. 11. Lennox, a paramedic who called in while at work, talked about getting thrown into the UFC fire early in his career and why he would never want to appear on The Ultimate Fighter. Watch or listen to the show below.