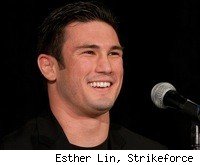 Following KJ Noons' 48-second EliteXC 160-pound title defense against Yves Edwards in June 2008, he was considered to be one of the rising lightweight stars in MMA. But failed contract negotiations with the organization and a desire to further his professional boxing career stunted his growth as a mixed martial artist immensely. EliteXC eventually stripped him of his title before the organization folded in October 2008. Noons hasn't competed in MMA since.

"King Karl" recently resurfaced with Strikeforce, signing a multi-fight agreement with the organization. The 7-2 fighter, whose most famous win came against Nick Diaz in November 2007, met with the media last week to talk about his future plans in MMA and why he still considers himself to be a champion. Check out a video of the press conference below.