Fighter of the Decade: Fedor Emelianenko 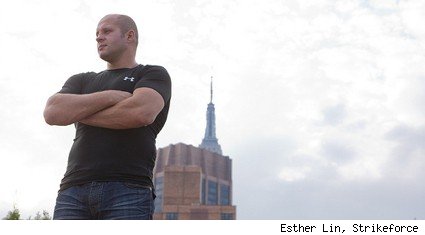 To say that Fedor Emelianenko is the mixed martial arts fighter of the decade is, if anything, to understate just how dominant a fighter "The Last Emperor" has been.

In a sport where results are unpredictable and no one is unbeatable, where legendary fighters like Randy Couture have pedestrian-looking records like 17-10, Fedor has stood far beyond the rest of the pack, establishing a record of 31-1, with the one loss coming when he was cut by an impermissible elbow.

Fedor started his MMA career in 2000, fighting in his native Russia with the RINGS promotion, beating a little-known fighter by the name of Martin Lazarov. He would fight twice more against little-known opponents, choking out one guy in seven minutes and knocking out another in 12 seconds, before Rings invited him to enter what might have been the most impressive tournament field in MMA history.

And yet fans who remember that tournament today remember it mostly for Fedor.

After Fedor beat Ricardo Arona by unanimous decision in the first round, he moved on to face Tsuyoshi Kohsaka in the second. Kohsaka hit Fedor with an elbow that opened a cut, and tournament officials ruled that Fedor couldn't keep fighting. Even though elbows weren't allowed in the tournament, they awarded Kohsaka the victory anyway because they wanted him to be able to move on to the next round. The fight should have been a no contest, but it was instead a loss -- still the only loss of Fedor's career.

Fedor fought a few more times in Rings, always winning in dominant fashion, before taking a step up in competition to fight in Japan with Pride.

In Fedor's first Pride fight he was matched up with the enormous Dutch kickboxer Semmy Schilt, a dangerous striker and three-time K-1 World Grand Prix champion who is almost a foot taller and 60 pounds heavier than Fedor. It looked like a mismatch, and it was -- just not the way people expected. Fedor avoided Schilt's striking and outmuscled him for 20 minutes, winning a one-sided unanimous decision.

Five months later, Pride matched up Fedor with Heath Herring, and although Herring made it out of the first round, Fedor had beaten him so savagely that the doctors wouldn't allow him to come out for the second. At that point, Pride decided to put Fedor in with its champion, Nogueira.

Nogueira's world-class Brazilian Jiu-Jitsu made many MMA observers think Fedor would have no chance with him on the ground. In reality, it was Fedor's incredible power that hurt Nogueira, using his ground and pound to win a unanimous decision and become the Pride heavyweight champion.

Fedor kept that title through 12 more Pride fights, growing his legend with each successive win. When Kazuyuki Fujita rocked Fedor with one of the hardest punches he ever took, Fedor recovered and finished him with a rear-naked choke on the ground. When Kevin Randleman suplexed him onto his head, Fedor calmly gathered himself on the ground and got Randleman in a kimura.

Fedor would beat Nogueira again in the final of Pride's openweight Grand Prix, and after that he would beat Mirko Cro Cop in a bout that many MMA observers thought for sure would give Fedor his first legitimate loss. No one is unbeatable, but the way Fedor tore through his opposition he looked close.

After the Cro Cop fight, however, Fedor started to take criticism for fighting opponents who should have been beneath him. His next five fights came against a collection of opponents who really weren't threats to Fedor's crown at all: Zuluzinho, Mark Coleman, Mark Hunt, Matt Lindland and Hong-Man Choi. Pride had fallen, Fedor hadn't signed with the UFC, and some fans feared that we'd never get to see the best fighter in the world test himself again.

Fortunately, we did. Affliction came along, brought Fedor to the United States, and signed him up to face three former UFC heavyweight champions: Tim Sylvia, Andrei Arlovski and Josh Barnett. Although the Barnett fight was canceled, bringing Affliction down with it, Fedor finished both Sylvia and Arlovski in the first round, removing any doubt that he was the best.

And in Fedor's final act of the decade, after spurning the UFC's offers once again, he beat Brett Rogers in a Strikeforce/M-1 Global co-promotion on CBS, giving him by far his largest American audience to date. Millions of Americans got to see MMA's heavyweight champion for the first time when he fought Rogers, and Fedor didn't disappoint.