Dan Henderson Relieved to Have Fresh Start in Strikeforce 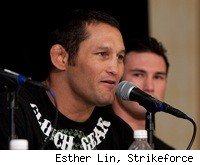 Dan Henderson has accomplished a lot in his MMA career, but he will now forever be known as the first star fighter to turn down an offer from the UFC to sign with Strikeforce. Only time will tell if his decision will prove to be a wise one or not.

The former Olympic wrestler and PRIDE champion met with the media late last week to discuss why he chose to leave the UFC and why he asked Scott Coker for an opportunity to fight the organization's current middleweight champion Jake Shields in his first fight, which is rumored to happen in April on CBS. Check out the video of the press conference below.