Fight of the Decade: Forrest Griffin vs. Stephan Bonnar 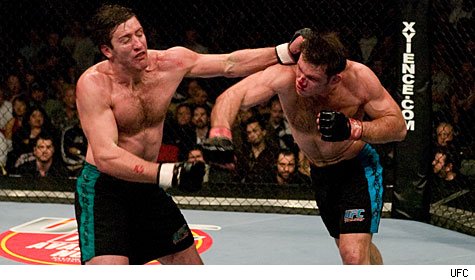 The MMA fight of the decade doesn't showcase all the techniques the sport has to offer, nor were the two athletes the upper echelon of skilled competitors in the sport at the time. But the fight itself embodied an aspect that transcends all sports: Heart.

The light heavyweight fight between Forrest Griffin and Stephan Bonnar during The Ultimate Fighter Finale televised live on Spike TV on April 9, 2005 displayed the grit and the mental toughness universally necessary in all sports to become a champion.

Griffin and Bonnar, up-and-comers fighting on a reality television show, weren't fighting for a belt, but they fought as if a world title was on the line.

Besides entertainment factor, the fight will always be remembered for a reason of greater importance; the 15 minutes of action essentially saved MMA.

"It's the most significant fight in UFC history," UFC president Dana White would repeatedly call the match. 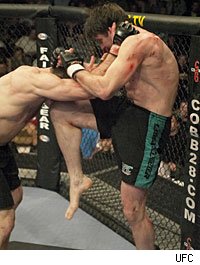 Entering the night's event, the UFC did not have a deal with Spike TV to return for a second season. The show was essentially an experiment and the finale itself was the first-ever live MMA card on television. But immediately following the conclusion of the fight, Spike TV and the UFC quickly renewed for at least two additional seasons.

The show just finished its 10th season, and tryouts have already been held for the 11th season.

"It changed the whole sport," said season one cast member Mike Swick. "It went from like two million viewers to 10 million viewers for the fight. It opened the eyes on our sport. It was huge. I remember watching it live and I knew it was history in the making."

The stakes were high for the company and the sport. And while the fighters weren't aware of the importance of that fight in regards to the future of the sport, they did know that the winner would receive a six-figure contract with the UFC, which would presumably guarantee them a career as a mixed martial artist.

"To me winning that fight [meant] not going back to a job," Griffin said during Spike TV's Ultimate 100 Greatest Fights special, which in July named the fight the no. 1 UFC fight of all-time. "If I lost the fight it was probably go back to work and not do this anymore."

"All I knew was that winner gets the contract and the loser goes home," Bonnar added on the program.

Brown and countless other fighters can relate. Brown was ready to accept MMA as a part-time gig prior to entering the show, but through the exposure on the show, he's become a full-time professional fighter and has compiled four wins in the UFC. And he agrees that the viewers should not judge the fight necessarily on the science of the fight, but rather the determination.

"They weren't fighting for a title," Brown said. "They are fighting to win the reality show, so you shouldn't expect the technical level of Anderson or GSP. They were fighting for their career ... Both of their personalities, both of them put it all on the line every time, anytime, so I can look past the technical side of that fight for the sheer heart that they showed and the determination."

The Ultimate Fighter 6 contestant Ben Saunders is thankful of the opportunity the fight has given him.

"They definitely helped paved the way for all of us fighters, the UFC in general, to explode to the mainstream," Saunders said. "I would have never been on TUF 6 and never probably made it to the UFC as soon as I did without the [publicity] and everything behind it. If it wasn't for their performance and for the amount of views that they got that night."

Barry, who currently fights for the UFC as a heavyweight, was not competing in MMA at the time of the Griffin-Bonnar match. However, their fight opened his eyes to the sport.

"I saw exactly what the rest of the world saw too. This stuff is real," Barry said. "That was what boosted the UFC into mainstream and that is real, man. Two guys who are skilled is one thing, but after a while that fight was all grit. Who wanted it more? They would not give up. Neither one of those. I actually think that if that would have been a roundless, timeless fight, they would have both had a stroke and died in the ring or that fight would still be going on today."

Griffin and Bonnar threw most of their shots with knockout intentions, but after three rounds the victor was left in the hands of the judges.

Griffin earned the nod, officially, but it didn't matter truly who won.

"We've decided that there is no loser in this fight and we are going to offer Stephan Bonnar a six-figure contract with the UFC," White proclaimed after the fight.

Griffin climbed the ranks after the show and three years later won the UFC light heavyweight belt and has headlined four UFC pay-per-views. While Bonnar hasn't matched Griffin's accomplishments, he's remain part of the UFC family and is scheduled to enter the UFC Octagon for the eleventh time in February 2010.

"You want to talk Royce Gracie and Ken Shamrock, at this point, [Bonnar and Griffin] definitely need to be up there in that Hall of Fame, " Saunders said.