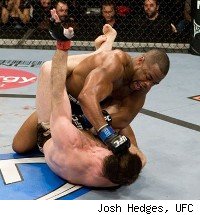 Last Year at Christmas, Rashad Evans was sitting in a hotel room at the MGM Grand in Las Vegas alone. On the cusp of his UFC light-heavyweight title shot against Forrest Griffin, he couldn't help but miss his family, but the sacrifice paid off when he defeated Griffin to become the champion.

One year later, Evans is again preparing for a key matchup during the holiday season. This time around, it's a key fight against Thiago Silva at UFC 108 on Jan. 2.

For the 30-year-old, it will mark a major first in his pro career: the first fight after losing.

"I was humbled big time," Evans said of his last bout, a knockout loss at the hands of current division champion Lyoto Machida. "When you're winning and things are going good, it seems like that's how it's always going to be. Things you know you should do, you kind of kind neglect because you've been getting away with it and winning. When you get your butt kicked, it's like 'Dang, if I would've tightend this up, or wouldn't have done that, or listened here, it wouldn't have happened.' It definitely humbled me."

The Machida fight took place in May, and was followed by a season coaching the UFC's reality show The Ultimate Fighter, a process that was supposed to lead to a matchup with fellow coach Quinton "Rampage" Jackson at UFC 107. While that fight was scrapped when Jackson took a leave of absence to take a film role in "The A-Team" remake, it's still one he'd like in the future.

Evans, however, is wary of talking about the fight for fear of being distracted against the dangerous Silva.

"In due time the fight will happen, but my focus is on Thiago so much, I don't want to overlook him even a little bit," Evans said on a recent conference call. "A lot of people are wondering about Rampage, but Rampage don't mean nothing if I can't beat Thiago."

Still, Evans says he got a good lesson out of the TUF experience.

Though he didn't spar for a while after the knockout, he did spend a lot of time training with the show's heavyweights, and that served to reignite his enthusiasm for the sport.

"I got a chance to see what I was like when I came to the house and see where I came from," he said. "It was a renewing experience. I feel like I've been doing this for a while. But seeing guys come in with hunger in their eyes, it helped me renew my hunger."

This particular fight might have given Evans all the incentive he needed. Silva, who like Evans had his only career loss come at the hands of Machida, recently had his own comeback fight. It came against Evans' top training partner and one of his best friends, Keith Jardine.

In that fight, Silva needed just 95 seconds to smash through Jardine in a first-round TKO. Though Evans insists this fight is not any more personal as a result, part of him has to love the idea of exacting some revenge for his friend.

"I felt kind of offended he beat my guy and kind of sized me up, but for the most part I have a lot of respect for him," Evans said.

Added Silva through his intrepreter, "There's no bad blood. This is my job. What I want to do is to be the best, and Rashad is in the way."

Evans and Silva were once before close to matching up. Before the UFC paired Evans with Chuck Liddell in what turned out to be his breakthrough performance in Sept. 2008, the organization approached the pair about fighting each other. The plans of coursed changed but Evans feels film study he did on Silva then as well as during the Jardine-Silva pre-fight camp have him well prepared now.

In recent days, there were reports that the seemingly snakebit UFC 108 card had suffered another injury as rumors of a Silva ankle injury surfaced.

Evans said he heard the rumors but prayed they weren't true so close to the fight date. For his part, Silva says there never was an issue.

"I was completely surprised with it," he said. "I don't know how this came out. It makes no sense. This was one of the stories that came out of nowhere. There's nothing wrong with me, I'm completely healthy and ready to fight. We couldn't understand where this thing came out from."

From Evans' side, he's in a position he's never faced before, trying to rebound from a loss. And with no fewer than eight UFC 108 fights scrapped due to injuries and illnesses from fighters ranging from Brock Lesnar and Antonio Rodrigo Nogueira to Sean Sherk and Tyson Griffin, he also has the additional task of trying to lift the quality of the card.