Muhammed Lawal on CSAC Fine: 'They Don't Want to See Me Have Fun' 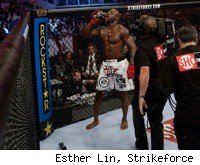 Muhammed Lawal celebrated his first Strikeforce win on Saturday night by paying homage to pro wrestling great "Stone Cold" Steve Austin. Austin was famous for smashing Budweisers together, pouring some of the beer in his mouth and the rest all over himself and the ring after a big win.

So Lawal recreated the Austin post-fight drinking scene with a few Rockstar energy drinks after defeating Mike Whitehead, however, the California State Athletic Commission did not appreciate the gesture and fined "King Mo" on Monday 10% of $20,000 purse. When FanHouse contacted Lawal, he was surprised to hear that he had been fined.

"I told Strikeforce. I figured that everybody knew. I think it probably had to do with the huge uproar because everybody was like, 'Mo's unsportsmanlike,' and their corny a** bulls***. They don't want to see me have fun and what not. They think this is the NFL."

Lawal even mentioned on last week's edition of The MMA Hour that he would pull off the stunt should he defeat Whitehead, and contrary to what has been reported online, this was not a cheap ploy to get a sponsor more air time.

"I'm not sponsored by Rockstar. The thing is, I couldn't have any other beverage in the ring. If I could have, I would have had Pepsi. But Rockstar is cool, they are the sponsor for Strikeforce, I have a lot of respect for Strikeforce so I just did it. Why not? I was just out there having fun."

Lawal took offense to people claiming he tried to soak the mat on purpose with three fights left on the card.

"I didn't splash the mat with the drink. The drink exploded when I opened it because someone shook it up," he said.

"As far as people saying, 'Yeah, Mo got the mat slippery on purpose.' Let me telling you something, you idiots: the canvas is slippery anyway. If I get Rockstar on the mat and it dries up, I'm doing them a f***ing favor, you know what I'm saying? It irritates me when people run their mouths and sh**. They always say the dumbest sh** ever and they don't know sh** about what's going on."

The former All-American wrestler at Oklahoma State University said that he tried to climb the cage so that none of the drink would fall on the mat anyway, but he was told by a CSAC official that he couldn't do so.

"I didn't know that you can't jump on the cage anymore. I had no idea," he said.

FanHouse contacted the CSAC on Monday to get an official reason for the fine, but didn't hear back.

Lawal planned on talking to his manager Dr. Ryan Parsons about contesting the fine, but doesn't know if that was even a possibility. Regardless of the fine, though, Lawal said he promises to do more elaborate celebrations following his future wins.

He kicked off his Strikeforce career with one of his now-famous entrances, but it wasn't televised. However, surprisingly, "King Mo" wasn't bothered by the fact that his entrance did not air on the Showtime telecast.

"It's whatever, man, because you know what? I don't care if they show it or not because I just do it for me. If I'm having fun and if people there are having fun ... if they want to see my entrances, they need to fly to a Strikeforce event and buy a ticket," he said.

Lawal is planning on training with the Golden Glory team in the Netherlands over the holidays to improve his striking skills. He has been placed under a one-week medical suspension by the CSAC, but hopes to talk to Strikeforce in the near future about his next fight. According to Lawal, Strikeforce CEO Scott Coker told him that he could be in line to fight the current light heavyweight champion Gegard Mousasi after two more impressive victories.

Viewed as one of the brightest young stars in the sport, Lawal improved his pro MMA record to 6-0 on Saturday night. Yet, due to his colorful personality and his willingness to always tell it like it is, he has received a lot of criticism online from MMA fans. Regardless, though, "King Mo" says he is fueled by his critics.

"Keep hating. Y'all are just wasting your time. Keep hating. There are other people out there you can hate on, but, actually, I'm proud that you waste all your time and energy to hate on me. Makes me feel special, and I'm just going to keep on doing what I do, so be prepared to be mad in the future."