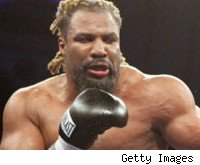 Ricardo Mayorga and James Toney are not the only boxers itching to get a slice of the MMA pie these days. Former WBO heavyweight champion Shannon Briggs is also reportedly training for his MMA debut, The New York Post recently reported.

Briggs, who turned 38 earlier this month, has a 49-5-1 career record in boxing, and most famously defeated George Foreman back in 1997 before being TKO'd by Lennox Lewis in a WBC title matchup.

Briggs recently returned to boxing after a 30-month layoff with a first-round knockout of Marcus McGee and had been expected to box again in January.

According to the Post however, he'll turn at least some of his attention to MMA under the tutelage of trainer Dan Anderson.

Ironically, his new career path will force him to eschew his own advice. Speaking on the possibility of fighting MMA in mid-2008, he told the now-defunct website HACNews.com:

"It would take me 20 years for me to become a good MMA fighter. I don't have that kind of time on my side. I'm sticking with what I know. I have all respect for it, but it's like me trying to become a surfer right now, it just wouldn't happen."

Briggs has reportedly signed with sports agency Madison Avenue Sports and Entertainment to guide his foray into the new sport.

The Brooklyn born fighter in the past has had at least loose affiliations to the MMA world, having worked with the renowned Florida-based fight camp American Top Team. In 2004, he beat former MMA fighter Tom Erikson in a K-1 matchup by first-round knockout.

Briggs would be the latest in a series of boxers hoping to use their striking prowess to score a payday in the sport.

Results so far have been mixed.

Former Olympic gold medalist and WBO champion Ray Mercer lost his MMA debut -- which was billed as an exhibition -- in 2007, being choked out by Kimbo Slice. In June, however, he knocked out former UFC champion Tim Sylvia in just nine seconds. In 2004, current WBF heavyweight champ Francois Botha was submitted via arm bar by current UFC middleweight Yoshihiro Akiyama.

Other fighters, like Hasim Rahman, have talked about fighting MMA but have yet to do so.

Earlier this month, Mayorga signed with the new Shine Fights promotion and is expected to debut in March 2010. Meanwhile, multiple-division champion Toney has talked about fighting in UFC, and even briefly met UFC President Dana White in Memphis earlier this month, but his venture into MMA seems unlikely at best.