Bobby Lashley: The Best Heavyweights Are in Strikeforce 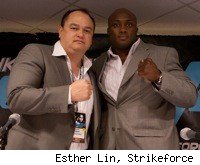 We should find out pretty soon whether Bobby Lashley -- the MMA fighter -- is for real. The current TNA wrestler recently signed with Strikeforce, and will debut for the organization on the Jan. 30 card on Showtime in Sunrise, Fla. No opponent has been officially announced just yet, but after facing subpar talent thus far in his MMA career, the former WWE star is expected to face tougher competition right off the bat.

Lashley met the press following Saturday night's Strikeforce: Evolution card to talk about why he signed with Strikeforce, whether he will continue his pro wrestling career, and why he thinks the best heavyweights are not in the UFC. Check out the video of the press conference below.