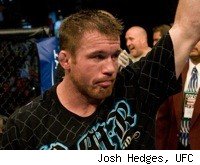 Saturday's Strikeforce Evolution show on Showtime went from a five-fight card to a four-fight card when the two scheduled opponents for Robbie Lawler -- first Benji Radach and then Trevor Prangley -- had to drop out with injuries.

Lawler's friend Matt Hughes thinks the inability of Strikeforce and Showtime to put Lawler in the cage is evidence of the promotion's imminent demise.

"I was in California with Robbie," Hughes writes on his web site, "hoping they would find a replacement so Robbie could fight. It didn't happen and I guess I'm just spoiled being with the UFC. From what I understand, Showtime really likes to stick their nose in Strikeforce's business and because of that I don't think that Strikeforce will be around for much longer."

I'm not sure I buy what Hughes is selling here. The truth is, Prangley pulled out three days before the fight, and the UFC probably wouldn't have found Lawler a new opponent with that kind of turnaround time, either. As Fight Linker pointed out, Dustin Hazelett wasn't given a new opponent when Karo Parisyan pulled out of their UFC 106 fight. Sometimes it just happens. It's disappointing, but it's not an indictment of the business practices of Strikeforce or Showtime.

Still, I assume Hughes is upset because Lawler is upset, and I can't blame Lawler: When he had his two exciting fights with Scott Smith on CBS in the spring and summer of 2008, he was one of the rising names in MMA. Now, thanks to EliteXC going under and Strikeforce scheduling snafus, Lawler has fought exactly once in the last 17 months -- and that was a loss to Jake Shields that lasted all of two minutes.

So I hope Lawler is back in the cage soon. There's a good chance he'll fight for Strikeforce on January 30, and there's talk that his opponent could be Melvin Manhoef, in a fight which is virtually guaranteed to be thrilling. MMA fans should get to see more than two minutes a year of Robbie Lawler.