Can Fabricio Werdum Be a Credible Threat to Fedor Emelianenko? 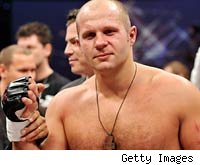 Strikeforce has some major momentum at the end of 2009, after successful shows on CBS in November and on Showtime on Saturday night. As it tries to keep that momentum going in 2010, all indications are that its next CBS show will be a co-promotion with M-1 Global featuring Fedor Emelianenko against Fabricio Werdum.

Is Fedor vs. Werdum the type of fight that can keep that momentum going?

I think it's a tough fight to sell. Certainly, a lot more people know who Werdum is now than did before he beat Antonio Silva on the last CBS MMA show. And it kind of makes sense for CBS to match up the two heavyweights who won on the previous broadcast and have them fight each other on the next broadcast.

But I think a Fedor vs. Werdum fight is sort of a lose-lose situation for everyone involved. Werdum isn't a thrilling fighter who's going to have casual MMA observers champing at the bit to see him fight Fedor, but he's arguably the best submission grappler in the world and has the potential to pull off a shocking submission and be the one to beat Fedor.

And can you imagine anything Dana White would love more than to have Werdum be the one to beat Fedor? Werdum was dropped by the UFC after Junior dos Santos knocked him cold at UFC 90, and he also has a loss on his record to another of the UFC's top heavyweights, Antonio Rodrigo Nogueira. White would have a field day talking about how Fedor is a fraud if Werdum were to beat him.

Of course, the same could be said if the other potential opponent for Fedor, Alistair Overeem, were to beat him: Overeem has losses on his record to UFC fighters Chuck Liddell, Shogun Rua (twice) and Antonio Rogerio Nogueira (twice). But that was back when Overeem was a light heavyweight. Now that he's a heavyweight, most people view him as one of the best in the world, and a good match-up for Fedor.

Unfortunately, Overeem has indicated that he won't be back in the United States until mid-2010, and that means the opponent for Fedor on the spring CBS card is likely to be Werdum. That's not a bad fight, but it is a tough fight to sell to the masses.