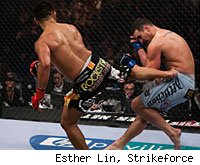 But was it as entertaining a show as a UFC pay-per-view?

Kid Nate at Bloody Elbow wrote after the fights Saturday night that "Tonight's card and the January card are both stacked with intrigue for the serious and the casual MMA fan and compare quite favorably to UFC 108 and 109." That's a bold statement.

The UFC is the gold standard in MMA, and no American promotion has been able to put on shows consistently that can hold a candle to what the UFC gives MMA fans week in and week out. Affliction, for instance, put on two very good pay-per-view cards -- but Affliction existed as a promotion for a year, did two cards, and then went out of business.

Strikeforce, on the other hand, is promising to give fans first-rate cards every month. And recently, it has delivered: In my opinion the November Strikeforce card on CBS was better than the UFC 106 pay-per-view two weeks later, and I agree with Kid Nate: Saturday night's Strikeforce card will be a tough act for UFC 108 to follow in a couple weeks, and the January 30 Strikeforce card may very well turn out to be superior to UFC 109 a week later.

On the other hand, we shouldn't carry this too far: Strikeforce doesn't have anywhere near the roster depth that the UFC does, and with the exception of Fedor Emelianenko, you're not going to see the truly elite, Top 10 pound-for-pound fighters in the world on Strikeforce shows.

In general, even if the entertainment value of the fights is better on a Strikeforce card, the quality of the fighters is going to be better in the Octagon. Melendez and Thomson gave us a more entertaining fight than B.J. Penn's beatdown of Diego Sanchez, but Melendez and Thomson are nowhere near as good as Penn. (In my opinion they're not as good as Sanchez, either.)

It should also be pointed out that the UFC gives fans a lot more fights than Strikeforce does: For UFC 108, the UFC will give fans two live fights on Spike, five live fights on pay-per-view and probably a couple of tape delayed fights mixed in there as well. If you watched Showtime on Saturday night, you only got four fights.

And in the spring, with Georges St. Pierre, Anderson Silva and Lyoto Machida all likely to defend their UFC titles, it'll be almost impossible for Strikeforce to keep up with the UFC. In MMA, there's still a big gap between the UFC and everyone else.

But as 2009 turns to 2010, that gap is closing. Strikeforce hasn't caught the UFC, but it is giving MMA fans a great alternative.