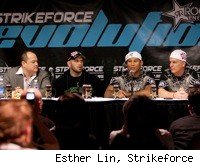 All signs point to Jake Shields defending his Strikeforce middlweight title against Dan Henderson in April, but following Ronaldo "Jacare" Souza's impressive first-round submission of Matt Lindland on Saturday night, the Brazilian fighter can certainly make a case for himself being the No. 1 contender, as well.

Souza and Lindland met with the media at the post-fight press conference in San Jose, Calif., and "Jacare" talked about why he thinks he deserves a title shot next, as well as potential rematches against Gegard Mousasi and Jason "Mayhem" Miller. Meanwhile, Lindland appeared hungry to get right back into action following his disappointing Strikeforce debut. Check out the video below.