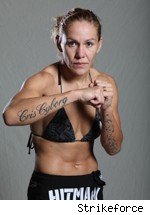 SAN JOSE, Calif. -- Cris Cyborg will defend her 145-pound Strikeforce title against Marloes Coenen and Nick Diaz will take on Marius Zaromskis for the vacant welterweight title at Strikeforce: Miami on Jan. 30 in Sunrise, Fla.

Cyborg (8-1) is returning from a shoulder injury that sidelined her at the Nov. 7 Strikeforce: Fedor vs. Rogers event. On the same card, Coenen (17-3) kept her title shot alive by tapping out Roxanne Modafferi with an armbar in 65 seconds.

"Everybody has a flaw in their game," Coenen said. "And I've seen flaws in her game."

Cyborg won the title in August by stopping Gina Carano in the first round with punches.

The first-ever Strikeforce welterweight champ will also be crowned at the same event when Diaz (20-7) takes on head-kicking expert Zaromskis (13-3) in a Strikeforce vs. DREAM matchup. Zaromskis holds the DREAM welterweight title, but it won't be on the line. DREAM title fights must happen inside a ring, according to Strikeforce CEO Scott Coker.

Jay Hieron, who was previously slated to fight Diaz for the title, will fight on the undercard.