WEC 45 Preview and Predictions on Cerrone vs. Ratcliff, More 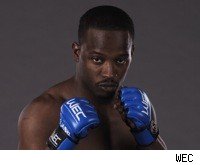 World Extreme Cagefighting is back on Saturday night in Las Vegas, with Donald Cerrone taking on Ed Ratcliff in the main event. We've got a full preview and predictions right here.

What: WEC 45: Cerrone vs. Ratcliff

Where: The Pearl at the Palms, Las Vegas

How: Watch live on Versus.

Predictions on the four televised fights:
Donald Cerrone vs. Ed Ratcliff
This fight matches guys whose careers are, in a sense, going in opposite directions: Cerrone has lost two of his last three and is talking about moving down to featherweight, while Ratcliff is a guy the WEC thinks could be one of its biggest stars in a year or two. But I think Cerrone has a well-rounded style that's going to give Ratcliff fits. Pick: Cerrone

Anthony Njokuani vs. Chris Horodecki
Njokuani has won Knockout of the Night honors in his last two fights and is another fighter whom the WEC views as a rising star in their organization. But I like Horodecki, who looked like an emerging star a couple of years ago in the IFL, is going to make an emphatic statement in his WEC debut. Pick: Horodecki.

Joseph Benavidez vs. Rani Yahya
I really want the WEC to add a flyweight 125-pound class because I just don't think Benavidez is big enough to compete with the biggest of the bantamweights. But I do think his stand-up style is tailor-made for beating Yahya standing up. Pick: Benavidez.

Takeya Mizugaki vs. Scott Jorgensen
Mizugaki is 1-1 in the WEC with a couple of hard-fought bouts against Miguel Torres and Jeff Curran. I think he's going to have a somewhat easier time with Jorgensen. Pick: Mizugaki.