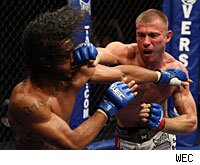 This is the WEC 45 live blog for Donald Cerrone vs. Ed Ratcliff, the main event of the evening.

Cerrone has lost two of his last three fights, while Ratcliff has won three of his four fights in the WEC.

Round 1: Cerrone and Ratcliff clinch early after a brief exchange. Ratcliff gets a takedown but lets Cerrone right up. Ratcliff's striking looking good early as he connects. A Ratcliff leg kick takes Cerrone off his feet. Cerrone clinches again. Cerrone answers back with leg kicks of his own. Out of the clinch, Cerrone hit Ratcliff with a knee, but the referee rules it a low blow and a timeout ensues. Just a few seconds after the restart, Cerrone hits him with another knee that lands illegally. Another timeout follows, and this time ref Herb Dean deducts a point. Cerrone gets a takedown with 15 seconds left and tries a guillotine but doesn't have enough time to sink it in.

Round 2: Ratcliff drops Cerrone again with another leg kick. Cerrone suddenly finds his rhythm, mixing up his offense to great effect. And then, suddenly, as he's gaining momentum, a third low blow from the clinch position. Ratcliff takes his time, but Dean deducts another point. Cerrone needs a finish to win. After shaking hands, he goes after Ratcliff, talking smack at him, and pointing to the center of the ring, inviting him to throw down. Ratcliff looks composed though, and doesn't go for it. Cerrone is opening up on offense, but Ratcliff is able to avoid anything major. Ratcliff clinches with 30 seconds to go. Cerrone tries a kimura and then a standing d'arce, but can't lock it in before the round ends.

Round 3: Cerrone comes out with a jumping knee followed by a left hook. The crowd starts chanting "Cowboy". Ratcliff tries a takedown. As he does, Cerrone grabs the fence and ends up on top. Ref Herb Dean calls timeout and doesn't allow Cerrone the top position after illegally using the fence to get there, which is the right call. Cerrone nods his head in acceptance and goes back to work. Cerrone gets the takedown and takes his back. Then, he transitions into a kneebar, but Ratcliff withstands the pain until Cerrone pulls off him. Cerrone then gets a rear naked choke with 1:20 left. Ratcliff fights it off for a while but finally succumbs and taps out with just over a minute left.