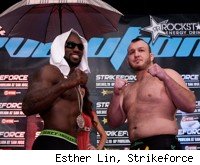 SAN JOSE, Calif. -- This is the Strikeforce live blog for Muhammed "King Mo" Lawal vs. Mike Whitehead, a heavyweight bout on the Showtime card.

The undefeated Lawal is making his Strikeforce debut.

Whitehead enters to zero reaction. To ready for the Showtime broadcast, King Mo waits on the platform accompanied by five ladies. When the music hits, Mo makes his way down dancing with the ladies. And of course, one of the ladies is holding an umbrella for him. Mo is wearing a shiny golden robe and crown.