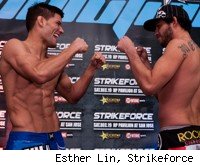 SAN JOSE, Calif. -- This is the Strikeforce live blog for Josh Thomson vs. Gilbert Melendez, a lightweight championship unification bout on the Showtime card.

Thomson won the Strikeforce belt away from Melendez in June 2008, but has yet to defend the title due to injuries. In Thomson's absence, Melendez captured the interim belt and will look to reclaim the world title in their long-awaited rematch.

Melendez walks out to a nice ovation. There's a section chanting his "El Nino" nickname. Former training partner Josh Thomson also gets a loud reaction, but mixed in with some boos from the Melendez die-hard supporters.

MMAFighting.com scores the first round 10-9 for Thomson.

Round 2: Thomson throws a kick and Melendez counters and puts Thomson down. Thomson quickly gets up. Thomson falls again, but it might have been a slip this time. They exchange punches. Melendez throws an illegal shot below the belt. Melendez bows to Thomson as an apology. Fight resumes and Melendez comes forward with punches. Thomson taps a leg kick and Melendez taps one back. Thomson attacks with kicks to each side of Melendez's ribs. Melendez shoots and Thomson stuffs it and throwing a knee to punctuate his effective takedown defense. Melendez catches a kick and runs forward with a knee. Thomson goes for a takedown and Melendez lands a knee in clinch. Melendez lands to the leg. Thomson throws rapid hooks and backs Melendez. They are trading wildly. Thomson drops to his knee. He stands up and is dropped again. Thomson works rubberguard . Great second round.

MMAFighting.com scores the round 10-9 for Melendez.

Round 4: Thomson connects on an inside leg kick. Melendez continues shooting out empty jabs before landing a leg kick. Thomson takes down Melendez, but Melendez stands up right away. They exchange punches with Melendez getting the better of the trade. Thomson comes over with the right. Melendez lands kicks and he's outboxing Thomson. Melendez catches a kick and almost trips Thomson. Thomson shoots and Melendez defends. Thomson looking for the knock out. Nice boxing war. Melendez throws a knee. Thomson throws a kick. Thomson got poked in the eye. The crowd boos Thomson.

Round 5: Thomson rocks Melendez and they trade punches again. These two don't mind swinging and these two are putting on a memorable fight. Melendez catches a kick and drops Thomson into guard. Back to their feet, they go at it aggressively. Melendez rushes in with a knee to the body and Thomson puts him on his back. Melendez scrambles out with under a minute left. Thomson hunts Melendez with punches. They exchange punches to close the fight. These two put on a show.