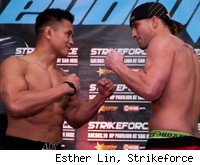 SAN JOSE, Calif. -- This is the Strikeforce live blog for Cung Le vs. Scott Smith, the main event of the evening.

Le, the former Strikeforce middleweight champion, makes his return to competitive fighting in San Jose after spending the majority of the last two years in the acting world. Smith is a puncher with the willingness to stand and test Le's San Shou kickboxing skills.

No surprise here who the fans are rooting for here, but Smith does have a small dedicated section of family and friends who traveled here to support him.

Round 1: Smith comes forward with punches and misses with a high kick. Le lands a side kick. Le lands a leg kick. Le's high kick is blocked. Le keeps Smith at bay with side kicks. Le misses on a high spinning back kick. Le drops Smith with a spinning back kick to the body. Le drops punches. Le tried to lock on a crucifix. Le continues to pound with right hands. Smith is not trying to escape, but finally does at 2:25 after repeated warnings from Big John. Smith chases Le with punches. Le drops Smith with another spinning back kick. Smith gets to his feet with 1:50 left. Le lands a head kick. Smith comes forward with punches and a high kick. Le shoves Smith against the fence with a spin kick to the body. The first round ends in clinch. Total domination by Le.

MMAFighting.com scores the round 10-8 for Le.

Round 2: Le pushes Smith's body with a kick. Le goes for a takedown but backs off. Le chops at Smith's leg. Le drops Smith with another spinning back kick to the body. Le is in Smith's closed guard.The referee restarts them on the feet with 2:24 left. Smith throws a flurry and Le backpedals. Le has more blood coming from his nose. Smith has a bodylock with Le against the cage. Le tries for a trip but Smith holds on. Le tries it again and Smith gets to his feet. Smith lets go to throw punches and Le escapes. They clinch with 30 seconds left.