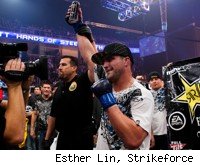 In a dramatic come-from-behind victory, Scott Smith spent two rounds getting kicked around by Cung Le Saturday night -- and then pummeled Le with hard punches and finished Le in the third.

Smith's third-round TKO victory was a sensational performance in the main event of Strikeforce Evolution, and the most impressive win of Smith's MMA career.

It was also the first loss for Le, the former Strikeforce middleweight champion who now focuses more on acting than fighting. Given Le's age (37), his interest in exploring other career opportunities and the way he wilted when Smith hit him hard, it has to be asked whether this was Le's last fight.

In the first and second rounds Le repeatedly knocked Smith down with spinning back kicks, showing off the exciting, cinematic style that makes many fans view Le as one of the sport's most exciting fighters. Smith looked like he had no answer for Le's unique stand-up style, and with the way Le was dominating the early action, it was surprising that Smith even made it out of the first round.

But in the third round Smith shocked Le with a hard left hand that knocked him down, and then knocked Le down again with another hard punch. And then Smith smelled blood and pounced, jumping on top of Le and forcing referee Big John McCarthy to stop the fight.

"That was so much fun," Smith said. "I've got a hard head. He beat on me for a good two and a half rounds."

Le showed a lot of class in the cage after the fight, crediting Smith for the win and insisting that his acting career hadn't in any way distracted him.

"He caught me with a punch," Le said. "He was the better man tonight. I did my best and he caught me."

Smith isn't a great mixed martial artist, but he has had an MMA career full of exciting highlights, and this win, which improves his record to 17-6, is just the latest. Le, who drops to 6-1 with his first loss, learned the hard way that Smith doesn't go down easily.