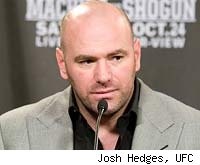 It didn't take the UFC long to make good on their promise to come to Boston.

"I'm going to put on a show that's going to blow the [expletive] roof off that place," White told the Herald.

In the story, White also dismissed rumors that the company is aiming to feature Brock Lesnar in the night's main event, reiterating the fact that Lesnar's status is uncertain until being re-examined following a severe bout with the intestinal disorder diverticulitis.

The event will serve as a sort of homecoming party for White, who has strong ties to the Boston area, spending several years in the city before moving to Las Vegas. The state boasts a thriving MMA scene and is home to fighters including Kenny Florian, Gabriel Gonzaga, Joe Lauzon and Dan Lauzon, among others.

It's very likely that more than one of those fighters will end up on the card. Florian in particular has lobbied to be included on the maiden event staged in the Bay State.

The event will be the first UFC show held in New England since UFC 55 emanated from the Mohegan Sun Arena in Uncasville, Conn., in Oct. 2005.