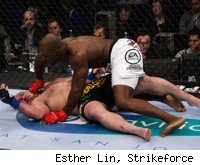 The fight was mostly a tentative boxing match for the first three minutes, but Lawal ended it suddenly and violently, landing a hard right punch directly onto Whitehead's chin and knocking him to the canvas, and then pouncing on him, punching him a couple of more times until he went out, and forcing the referee to step in and stop the fight.
After the fight Lawal boasted that he'll fight anyone -- "I fight where the money's at" -- and sounded eager to get back into the cage soon. He's one of Strikeforce's best up-and-coming stars, and he should have a big year in 2010.