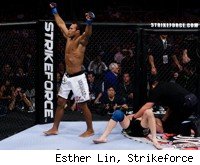 Souza is widely regarded as one of the best jiu jitsu practitioners in the world, but it was surprising in the early going how impressive he was on his feet. Souza landed a number of punches and showed off speed and accuracy with his hands that Lindland had no answer for.

But it was when the fight went to the ground that Souza was at his best: He tried a number of submissions, appeared to have both an arm bar and an omoplata, and finally got Lindland to tap with an arm triangle choke.

Souza improved his record to 11-2, with 10 wins by submission, and showed that he can be a threat to anyone in Strikeforce's middleweight division. Lindland suffered his second consecutive first-round loss and fell to 21-7.