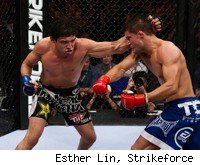 Gilbert Melendez beat Josh Thomson by unanimous decision to win the Strikeforce lightweight title Saturday night at Strikeforce Evolution, in a fight that featured 25 minutes of hard-striking action and left the rival fighters embracing and then applauding each other.

The first round was an exciting one, with Thomson getting the better of the early exchanges when he and Melendez traded punches, and Thomson also taking Melendez down by catching a kick. But Melendez kept punching and landed some effective strikes late in the first.

In the second round Melendez landed a brutal right hand to Thomson's face and sent Thomson straight to the ground. But Thomson, surprisingly, shook it off and popped right back up. Melendez later landed an unintentional knee to the groin, which caused a delay in the action and caused the fans to boo a fight they had been cheering.

The final minute of the second round turned explosive, with Melendez and Thomson swinging wildly at each other and Melendez dropping Thomson again. But Thomson survived again, pulling Melendez into his guard on the ground.

Things slowed down in the third round, but Melendez was more effective and accurate in his striking, and the same went for the fourth, which had to be paused in the final seconds when Melendez accidentally poked Thomson in the eye.

By the end of the fifth, Melendez looked determined and Thomson looked dejected. Thomson did manage to take Melendez down in the 25th and final minute of the fight, but Melendez got back up once again.

"It feels great," said Melendez, who improved his record to 17-2. "Josh is the toughest guy I've fought."

"The reason Gilbert beat me to night is he was the better fighter tonight," said Thomson, who fell to 16-3.

The bout was a rematch of Thomson's unanimous decision victory in June of 2008, and it's likely just a matter of time before Strikeforce sets up a rubber match.For now, though, Melendez is the champion.