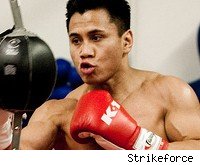 Strikeforce reunites with Cung Le for a homecoming Saturday at the HP Pavilion in San Jose, Calif. to close out a breakout year for the organization.

The Showtime-televised card, dubbed "Evolution," could also see Strikeforce newcomers Ronaldo "Jacare" Souza and Muhammed "King Mo" Lawal position themselves as the future of the promotion.

My predictions are below.

Last September, Cung Le vacated the Strikeforce middleweight title thinking he would not have the time to defend the belt, but he's back in Strikeforce here earlier than expected after a film project was pushed back to 2010. Despite missing over a year-and-a-half of competition to pursue an acting career, ring rust will not likely be an issue for the San Shou superstar. Le has taken hiatuses in the past and remains undefeated in both kickboxing and MMA. If anything, any decline could be chalked up to being at 37 years of age.

Le faces the hard-hitting Scott Smith, who fits the description of Le's previous opponents: Fighters who will conveniently stand and test Le's striking, while having little to no inclination towards taking Le down. But what sets Smith apart from the rest is the knockout threat Smith possesses that Le hasn't faced since his San Shou days. Still, Le will have the edge in speed, timing and technique if the fight stays on their feet -- which it will. But Smith is a tough fighter to finish and has made a career in MMA out of come-from-behind victories, so unless Le gets lazy with a flashy kick and gets countered by a powerful right hand. Le should take the unanimous decision.

Josh Thomson and Gilbert Melendez finally meet in a rematch that will unify the Strikeforce lightweight belts. In June 2008, Thomson won a lop-sided decision against Melendez to win the belt, but since then, Thomson's been plagued with injuries and has yet to defend his belt. Melendez on the other hand, remained active, finishing two game opponents in interim title bouts against Rodrigo Damm and Mitsuhiro Ishida. Although Thomson is the favorite here, and with reason, for how effective his wrestling defense and striking was against Melendez in their first fight; there's question marks on Thomson's health and his ability to shake off ring rust. He insists he's healthy and he's ready, but I'm picking the more progressive fighter in Melendez who has shown to be an improved fighter every time he steps inside the cage.
Matt Lindland (185.25) vs. Ronaldo "Jacare" Souza (185.5)

Ronaldo "Jacare" Souza is one of the most dangerous Brazilian Jiu-JItsu artists in that he can do more than control his opponent. He's along the lines of a Demian Maia, an offensive-minded grappler that forces opponents to rethink their ability on the ground. Matt Lindland at one point was one of the top middleweights in the world, but hasn't been recognized as such in recent years due to the lack of notable wins and a brutal knockout loss in his last fight at the hands of Vitor Belfort. Souza and Lindland have met before at ADCC 2003 and Souza put on a clinic against the Olympic wrestling silver medalist. Obviously, adding strikes to a fight dramatically changes the playing field, but Souza has shown his ability to translate his gift on the mats to MMA canvas. Souza wins by second-round submission.

Wrestling-based fighters Muhammed Lawal and Mike Whitehead, who both generally fight at 205 pounds, were spared the inconvenience of weight-cutting in an agreed-upon heavyweight bout. Whitehead requested the weight and it's obvious why. Whitehead cuts from as much as 285 pounds and he'll have the weight advantage against Lawal, who appears more suited for light heavyweight, officially weighing-in at 218.5 pounds. Lawal is explosive and a quick learner as seen in his Sengoku fights. Credit the resilient Whitehead for being tough to finish, but he will have a hard time against the better wrestler. Lawal will pound Whitehead out for three rounds for the unanimous decision.